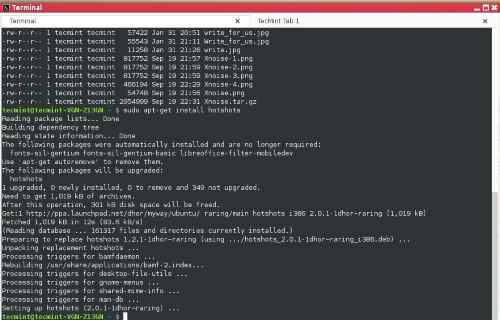 Lately quite a lot of friends and colleagues at work were talking about their recent switch to Linux. Rather strange since all of them were avid Windows users since the beginning of time, and some of them don't really hold the reputation of being, well, tech savvy. I was intrigued in a sense and inquired about their sudden motivation. These are the things that popped up: 1/ they heard a lot of stories about windows 10 and its data collecting (I don't know if any of these stories are true, but I read that the latest windows version collects quite a lot of its user's data which it sends back to US servers) 2/ they are sick and tired of the vast flow of updates, and 3/ especially the Linux flavour 'Ubuntu' is the first (?) Linux distro which is extremely 'ex-Windows-user' friendly. Gone are the days that a Linux user must-should be extremely technically minded. One can switch over to Ubuntu without too much hassle or complexity I was told. They said it is fun to work with the so called 'terminal' (typing in your commands with the keyboard, in Windows the DOS console) but it isn't a 'must' anymore. I spoke with several Ubuntu users sticking to the GUI of their Linux OS, doing everyday tasks (internet, email, video editing, playing audio files, watching movies, writing documents and fooling around with excel files) without going to the terminal once. So it works. It works right out of the box ;-) They said: install it, play with it and work with it. Obviously I was interested, and decided to give it a go myself. I used an old laptop that was lying around collecting dust and installed Ubuntu 16.04 LTS on it. That went quite well and fast. And it was a bit exciting as well ;-) Okay, in the beginning it did feel a bit strange and new. I had to find my way around and get used to the way new programs are installed, but I really got hooked rather rapidly! And everything is absolutely free! The OS with his absolutely free updates, the free programs, and one doesn't even need a virus killer anymore. I made a list of all the programs I regularly use on my Windows machine (also the ones I use rarely) and found exactly the same programs or equivalents for Linux. So I could compare, and some are indeed almost exactly the same, some are (really) better. And each and every program is freeware. With free updates and great active communities to give support or help me out (via websites and forums). I played around with the old laptop and my ubuntu Linux for about two months, and then created a dual boot on my (recent) more powerful desktop PC. A small partition is for my Windows and the rest is for Ubuntu 16.04 Actually, my friends told me it makes sense to keep windows on the side, especially if you're into playing computer games. But I disconnected my network card in Windows so it won't connect to the internet at all. Conclusion: I'm extremely satisfied with my switch, and I even started fooling around with the terminal, just for fun. I like it a lot but am aware that a lot of people won't be quite so enthusiastic. Luckily an Ubuntu user doesn't have to use the terminal at all. Especially for those who are about to anyway (or who want to try something new), I collected a bunch of commands which I will be sharing with you further on. Some are simple, some need root or super user privileges and others may be risky even. So use with caution. Use the '--help' or 'man' command to get more info or lookup more information on the net before using them. I don't see the point in putting up some pages about 'how to switch' to Linux since there are soooo many pages already available on the net. Just do a search on 'switch from windows to Linux' or 'installing Ubuntu 16.04', 'from windows to Ubuntu 16.4' or 'dual boot Windows and Ubuntu'. You will find hundreds if not thousands of pages with very useful step-by-step information!

The following terminal commands are fun, some may be complicated, others carefree and some of them may even be dangerous. Use the --help command to learn more or search after the command's do's and dont's on the internet before trying them out or using them on your machine.

'alias' : is another name for a command

'grep' : searches for a pattern in a file

'cd' : change the current working directory to the directory provided as argument

'echo' : echo whatever you provide it

'file' : determines the file type of a file

'find -type f -print0 | xargs -r0 grep -F EXMPLE' : Search all regular files for EXMPLE in this dir and below

'head' : display the first few lines of the file

'history' : shows the commands you have entered on your terminal so far

'last' : display information about the users who logged in and out of the system

'netstat' : check the network statistics of the system

'shutdown -h' : shut down your system

'stat' : check status of a file

'w' : check which users are logged in to the system

'wc' : counts lines, words and letters of the input given to it

'whatis' : gives a one line description about the command (Ex: whatis cal)